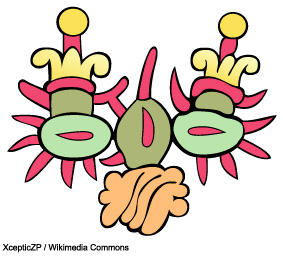 Glyph for Tenochtitlan from the Codex Telleriano-Remensis. 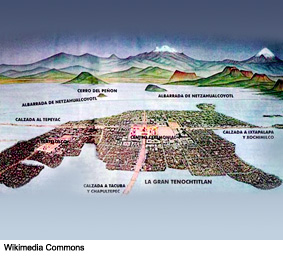 Map of the Mexica's island city of Tenochtitlan by L. Covarrubias. 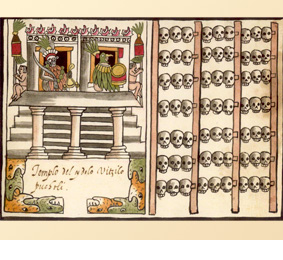 An Aztec temple and a skull rack are depicted in the 1587 Codex Tobar.

‹›
Mexica refers specifically to the inhabitants of Tenochtitlan, a city built in the fourteenth century on an island in Lake Texcoco—known today as Mexico City. The terms Aztec and Mexica (pronounced me-shee-ka) are often used synonymously, but they are not the same. Aztec is the broader term, and refers to several different peoples that trace their origins to a legendary place called Aztlán. These groups include the Mexica as well as the Tepaneca, Chichimeca, Xochimilca, and others. All of the Aztec groups spoke Nahuatl.